This was such an in-depth project, definitely the most difficult thing I’ve done so far.  It took several months to research, prototype, and build.

Below I go over a crash course of the synthesizer, but no explanation beyond a book is going to cover it all, so I’m erring on the side of brevity and clarity even if lots of topics get missed or glazed over.

The sound wave screenshots below are taken from an oscilloscope.  I wish I had more but I wasn’t focused on capturing examples while building it and now it’s all put away.  Next time…

We are able to hear because our ears are sensitive to changes in air pressure.  If air pressure changes, we perceive that as sound.

When an object hits the floor, it makes a noise because it rattles around and causes ripples of air pressure.

Musical instruments are designed specifically to wobble around in a way that produces ripples of air pressure that we like to hear.

Synthesizers set out to make sound by first deciding what ripples it wants to generate, then shoving that signal into a speaker to make it happen.

When you see “sound waves” in an image, that is a graph of sound pressure over time.

For example, here is a Sine Wave, and its properties are:

Increasing the Frequency makes it “higher frequency” or “high pitch.”

Increasing the Amplitude increases the loudness.

When you mix two sound waves together, by having them happen at the same time, you get more complex sound.

The pure Sine Wave above would sound pretty bad by itself, kind of a piercing electronic sound.

Musical instruments have a lot more character by design.

Musical instruments mix natural reverberations within the physical instrument together with the designed-in frequencies being produced to have a timbre (a quality of sound) that is pleasing.

Synthesizers aim to do more than generate “pure” tones and enrich the sound with other tones and distortions.

The gradual change in volume of a sound wave is tremolo.

Here you can see a regular Sine Wave being varied in its amplitude over time.  You’ll hear singers do this, and musical instruments as well.

The gradual change in frequency over time.

I don’t have a screenshot! 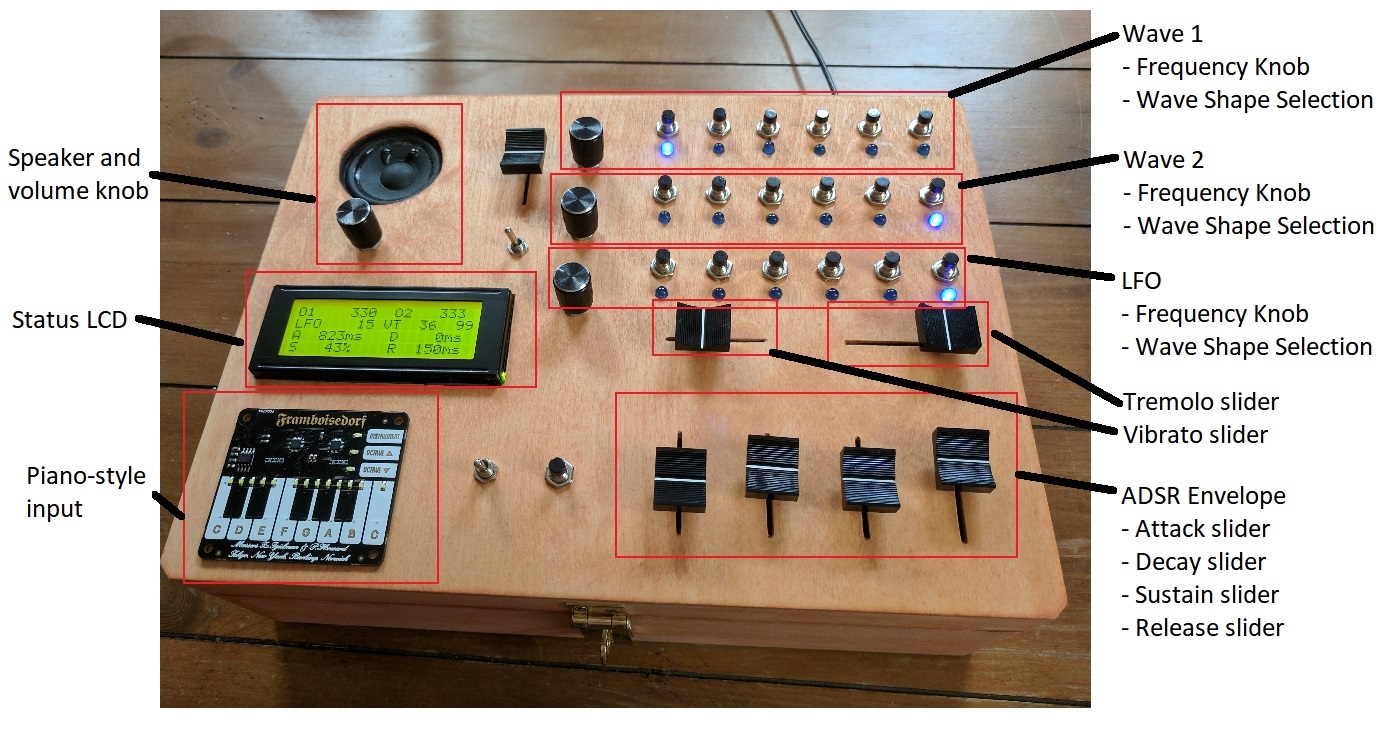 In a nutshell, the synthesizer allows a user to:

Here are the 5 sound wave shapes you can choose from: 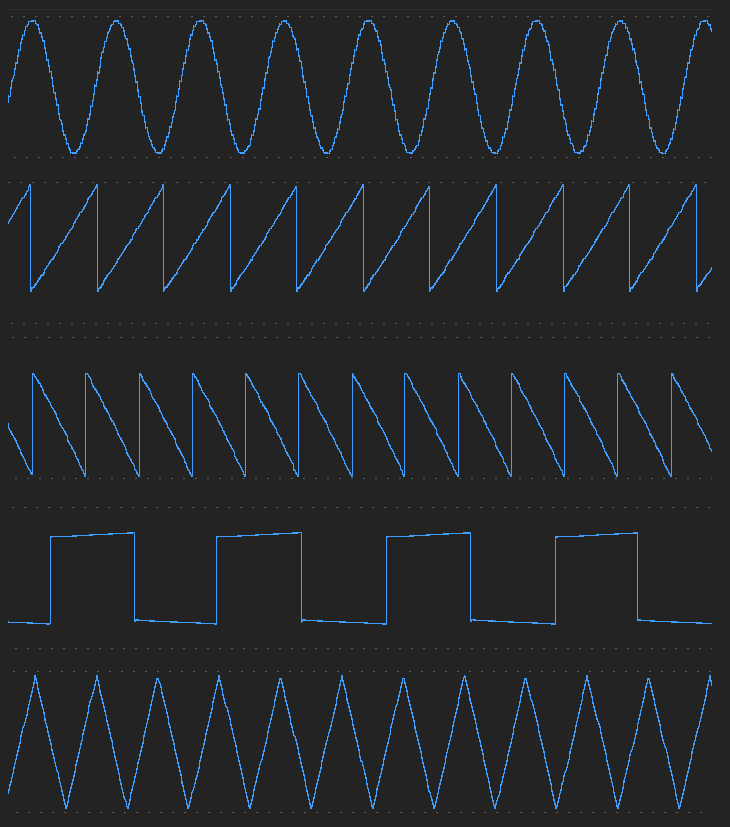 You to interact with a piano-looking interface.

When a key press is detected, the frequency of that note is synthesized while using the selected waveforms from the buttons.  Allows users to change the sound of key presses.

It is also in this mode that the ADSR Envelope takes effect, giving a bit more of a “regular synthesizer” feel.

Changing octaves works, as internally the software knows the frequency relationship between one octave and another and accounts for that.

Instrument key also switches between a number of pre-selected combinations of waveforms. 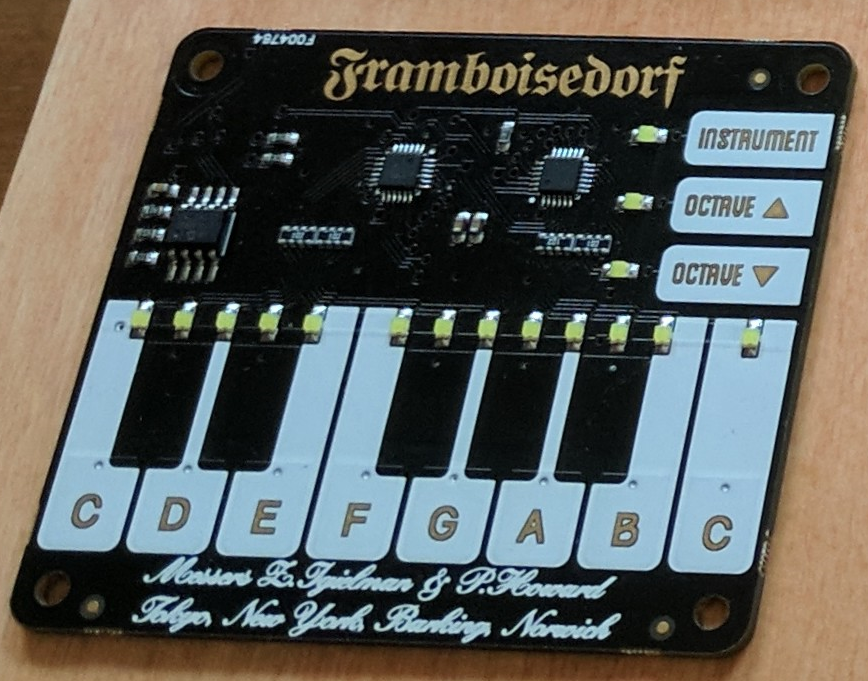 The LCD tells you the current state.

This is updated whenever you choose a waveform, move a slider, or press a keyboard key.

Analyzing the image below:

And an output audio jack. 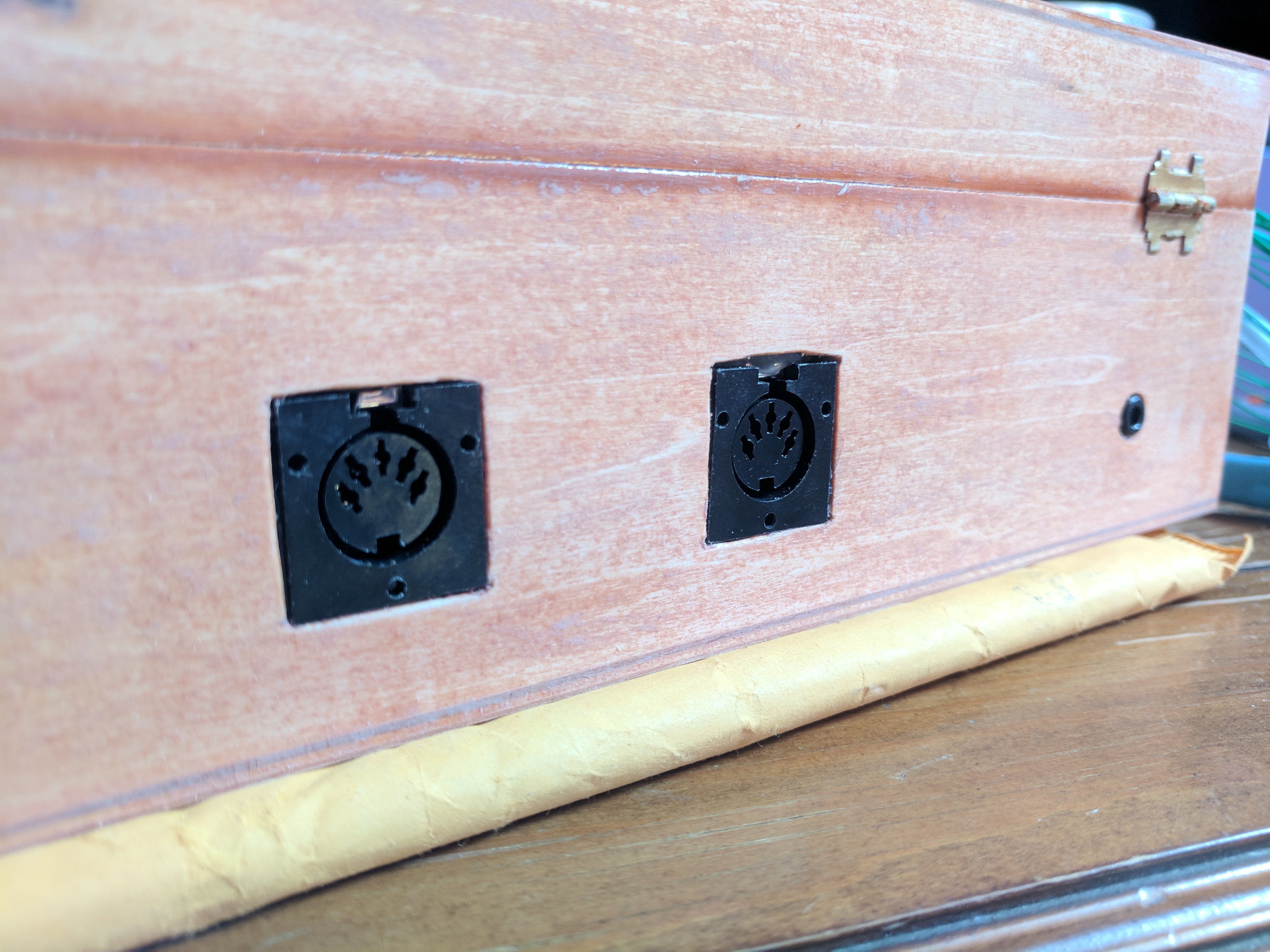 The two parts communicate via MIDI, in software.  As in, actual serial MIDI messages.

The MIDI jacks in the back allow you to listen to or inject MIDI into each half.

The primary difficulties were due to limitations of the Atmega328:

The most performance-critical aspects of processing were related to:

Built a TK implementation of the interface I wanted to test the software before trying any build. 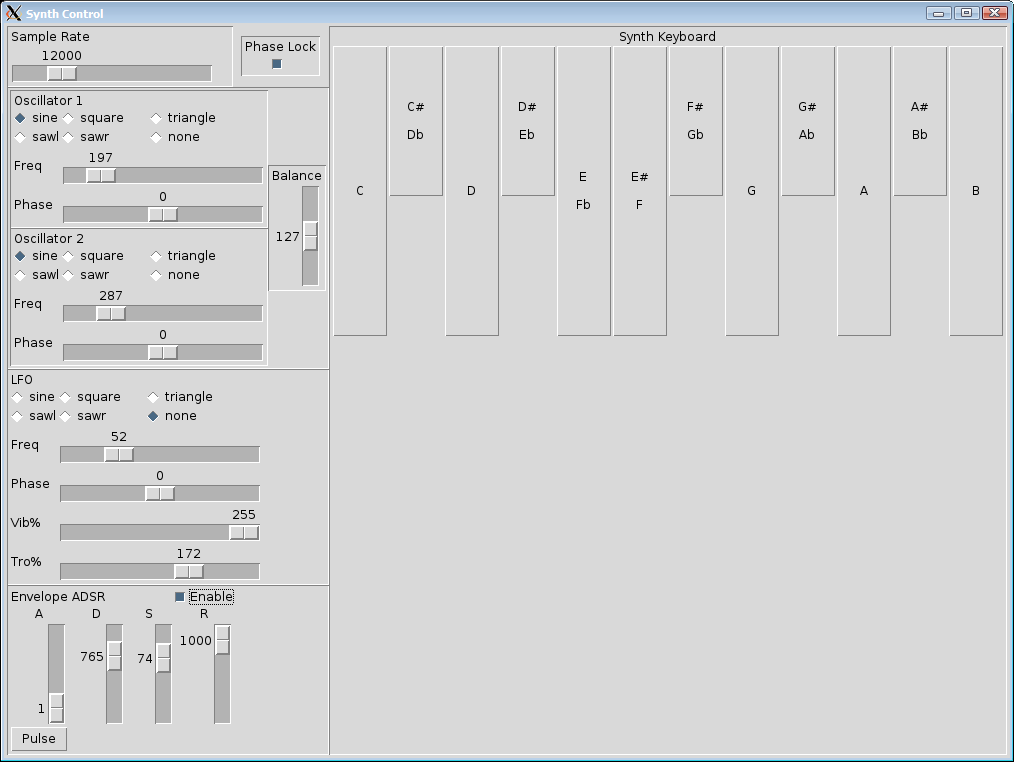 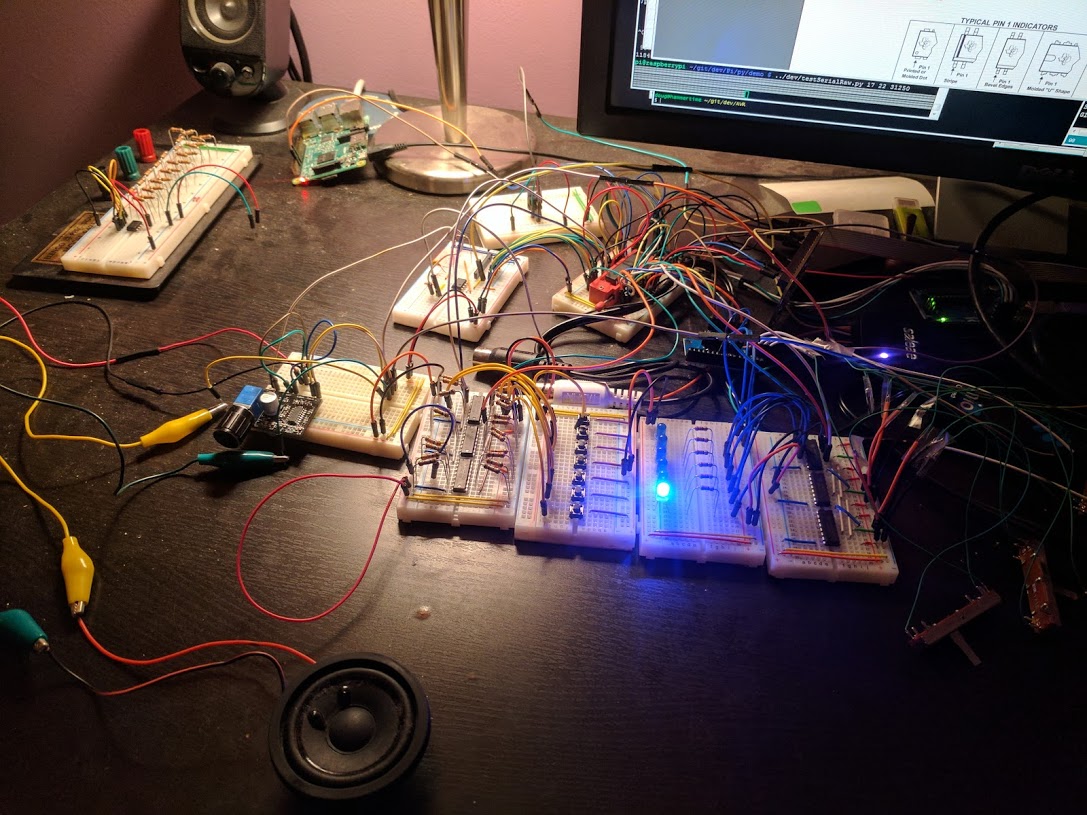 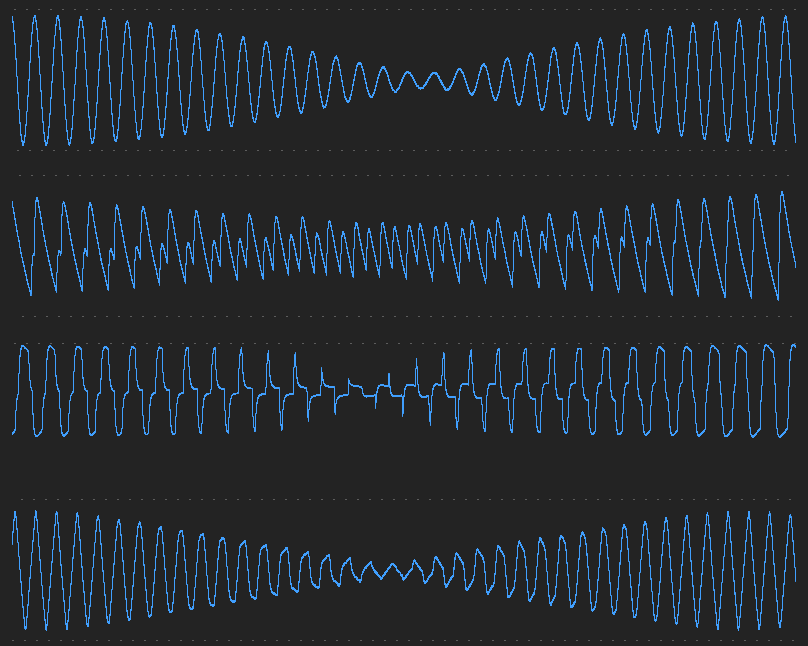 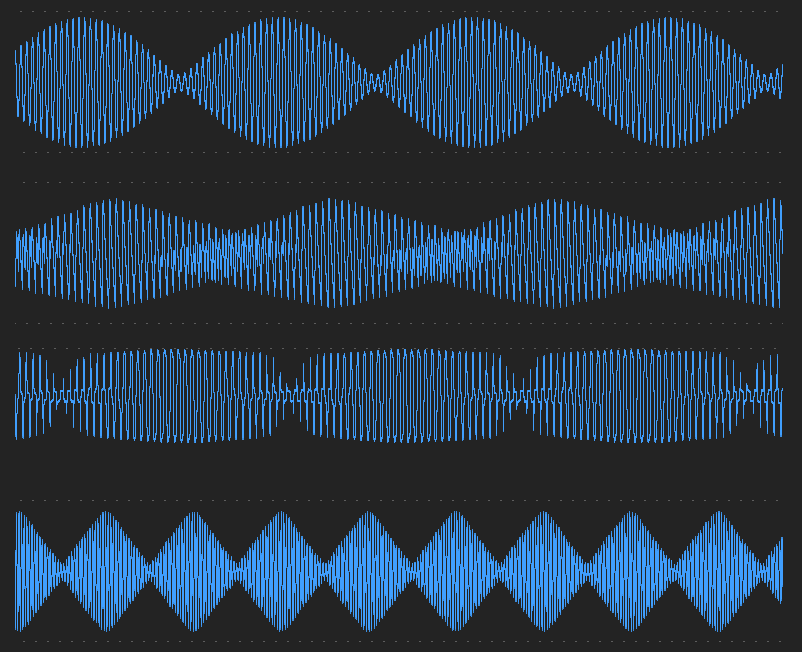 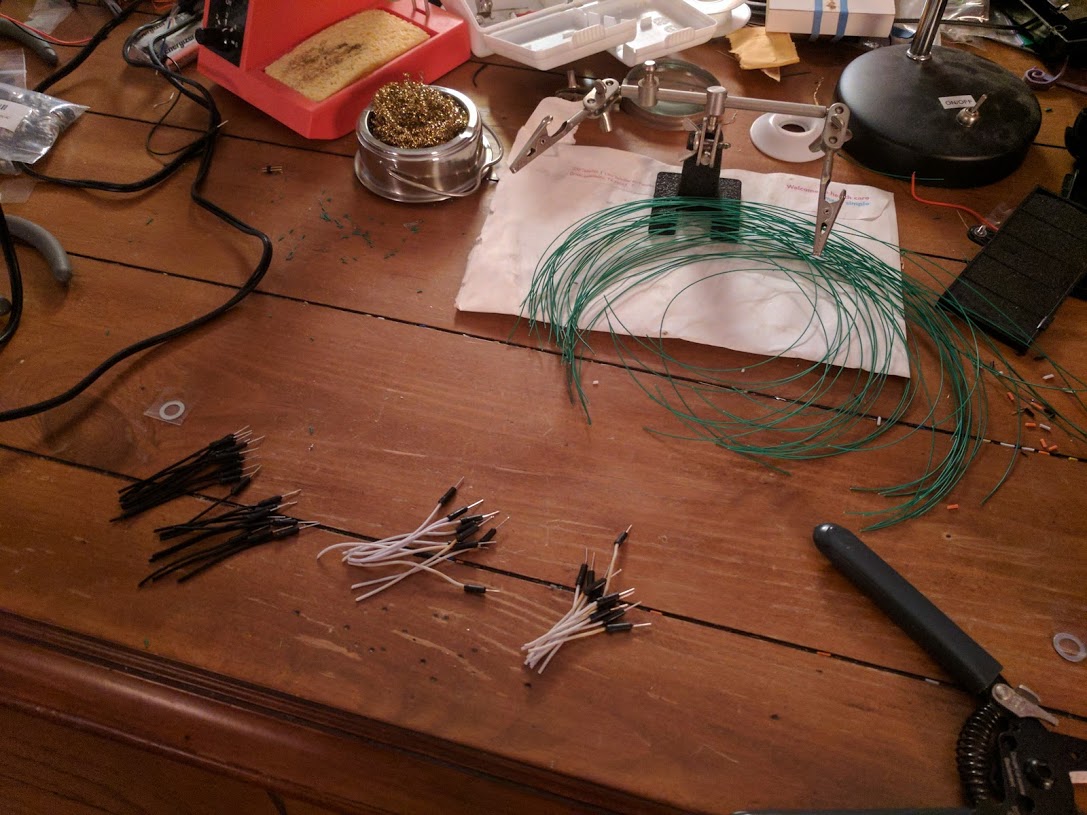 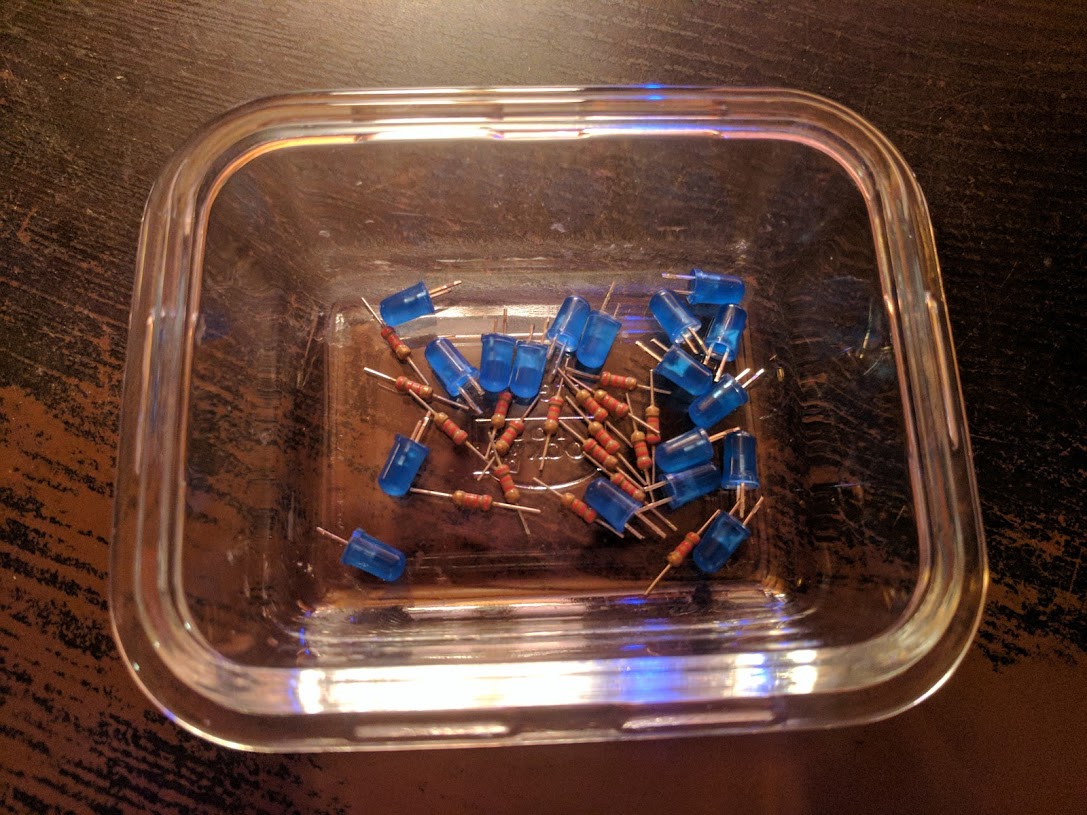 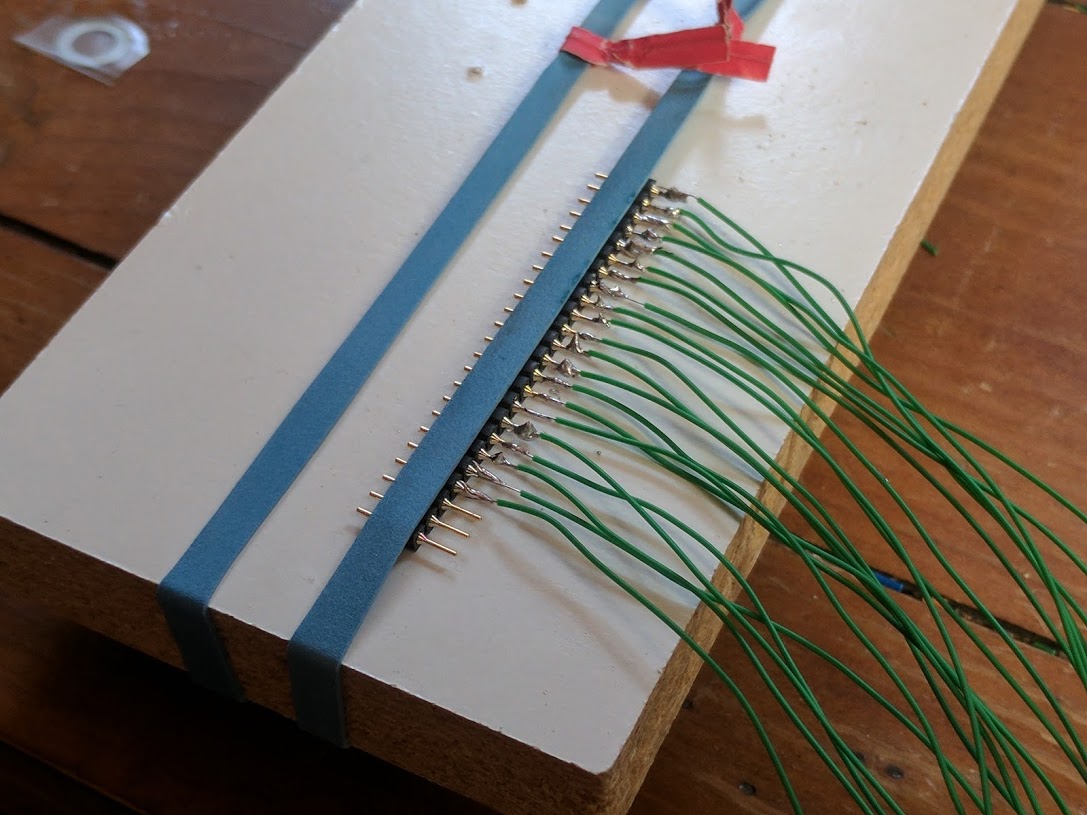 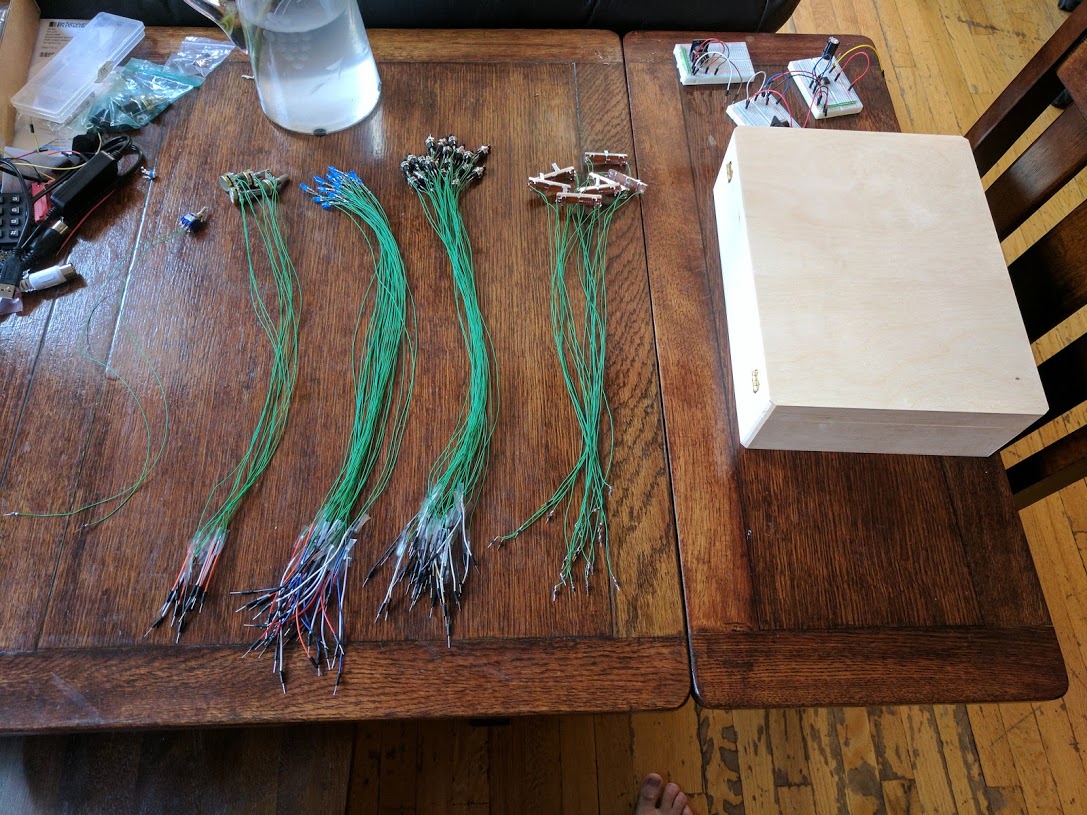 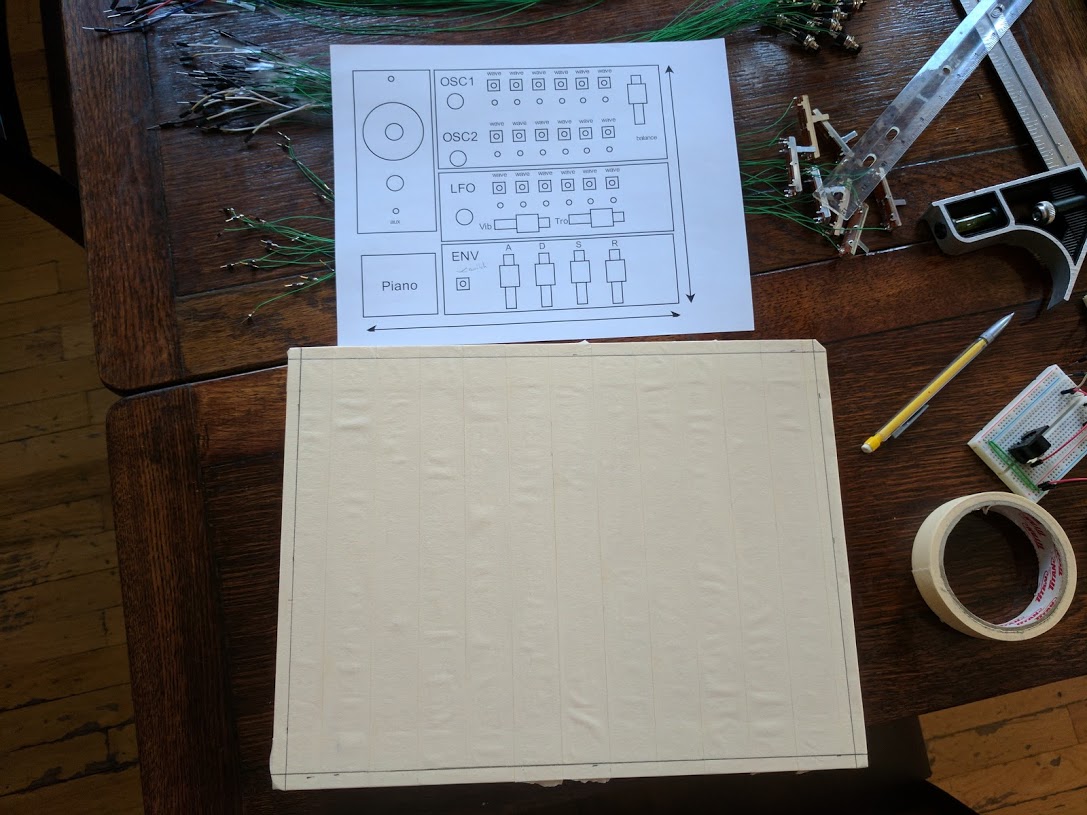 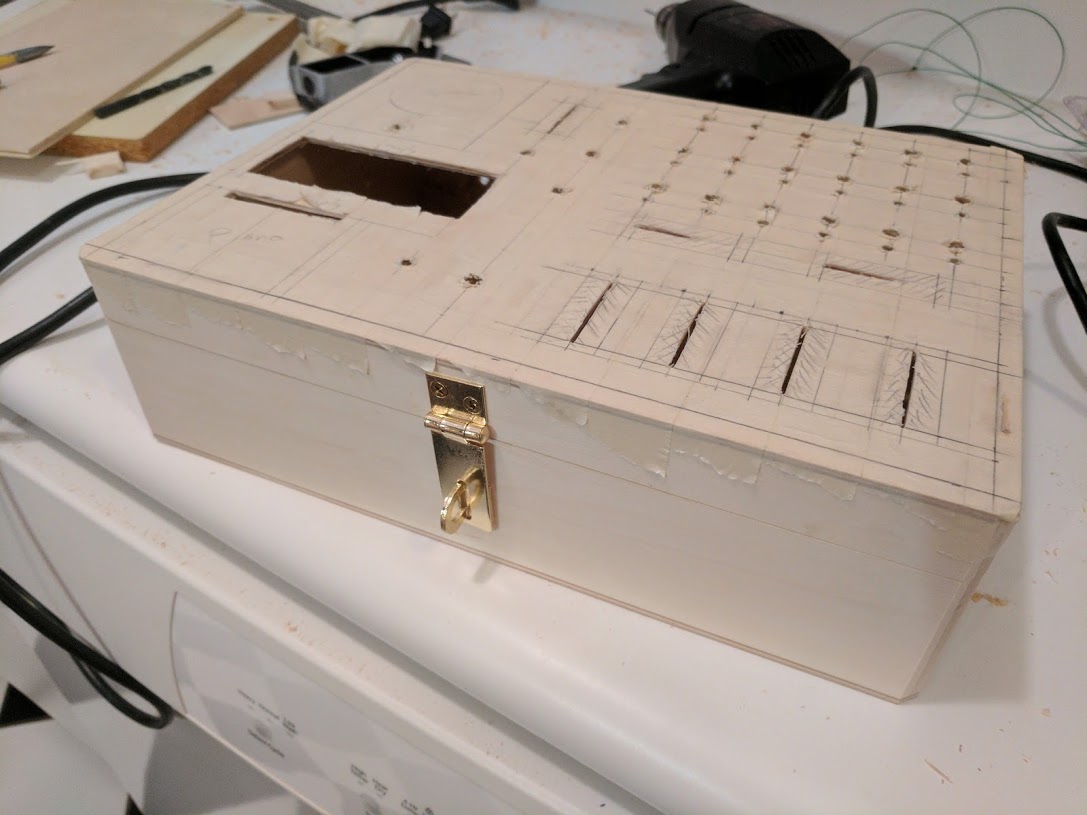 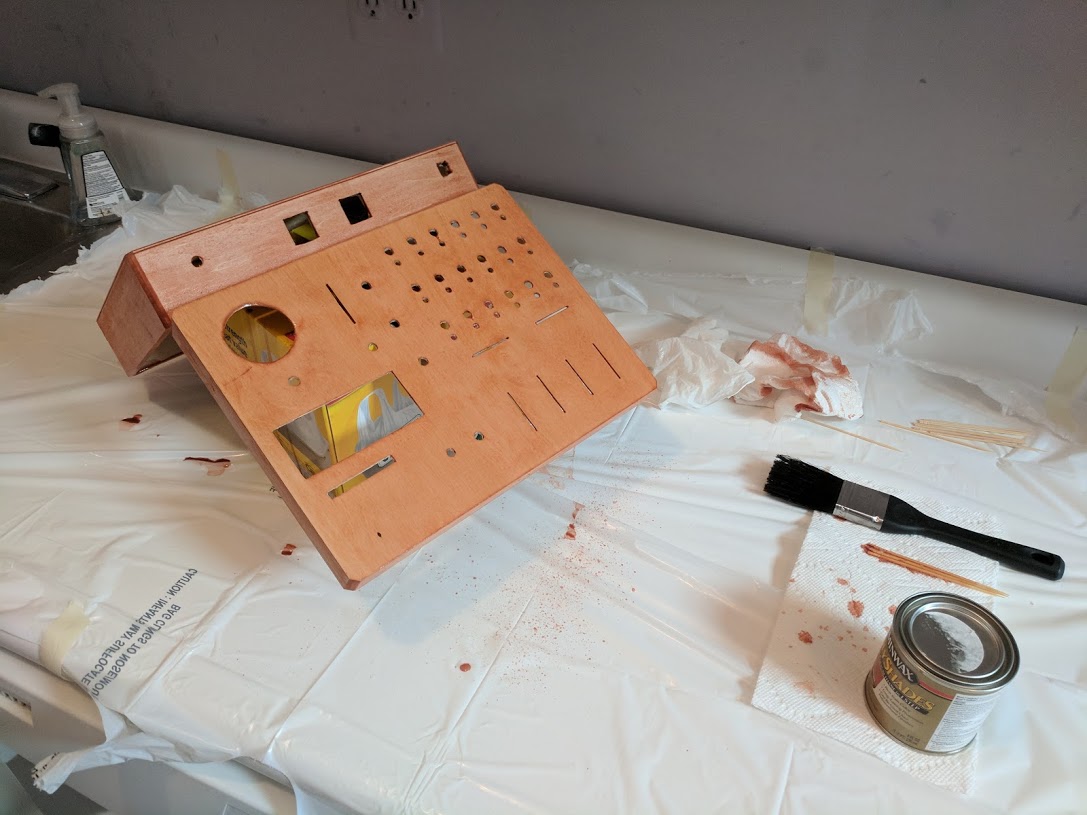 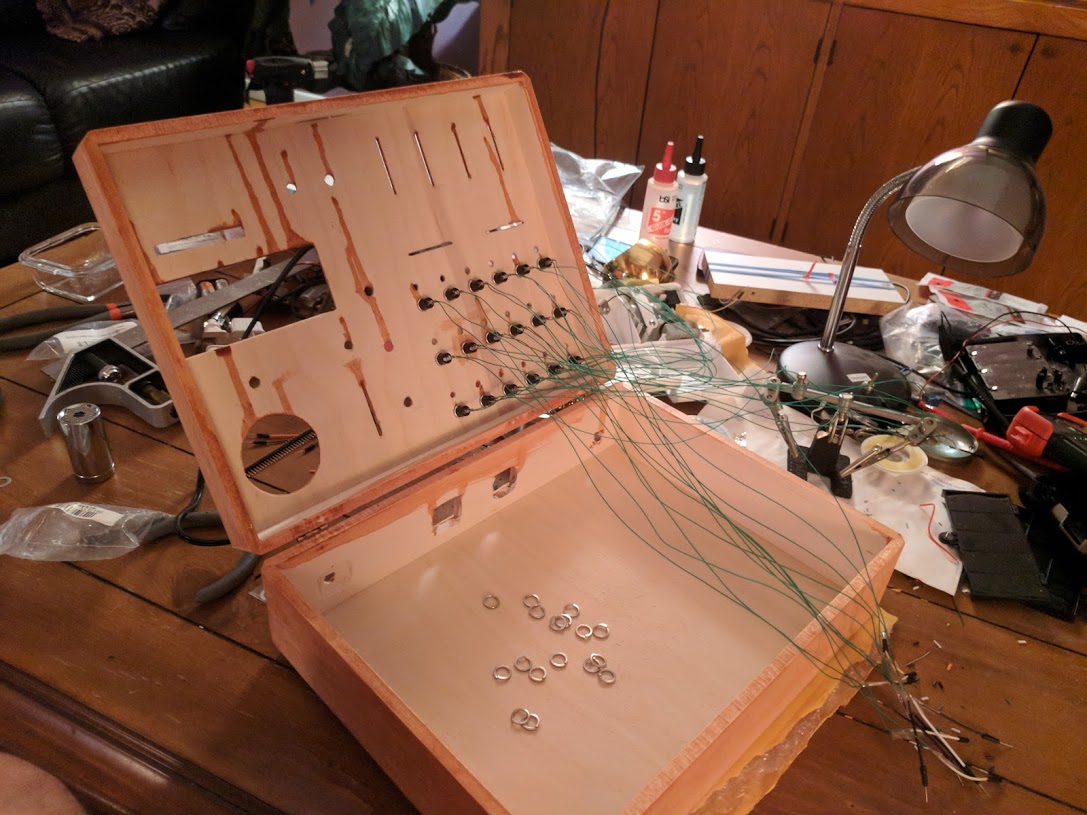 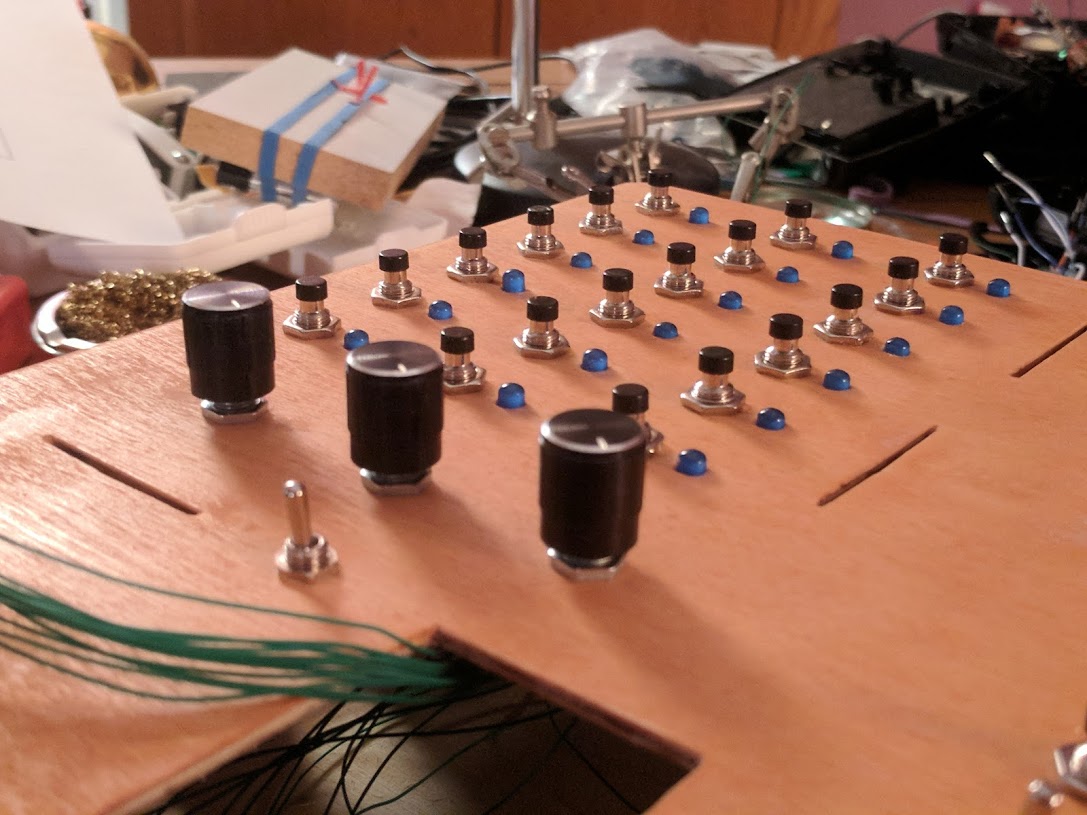 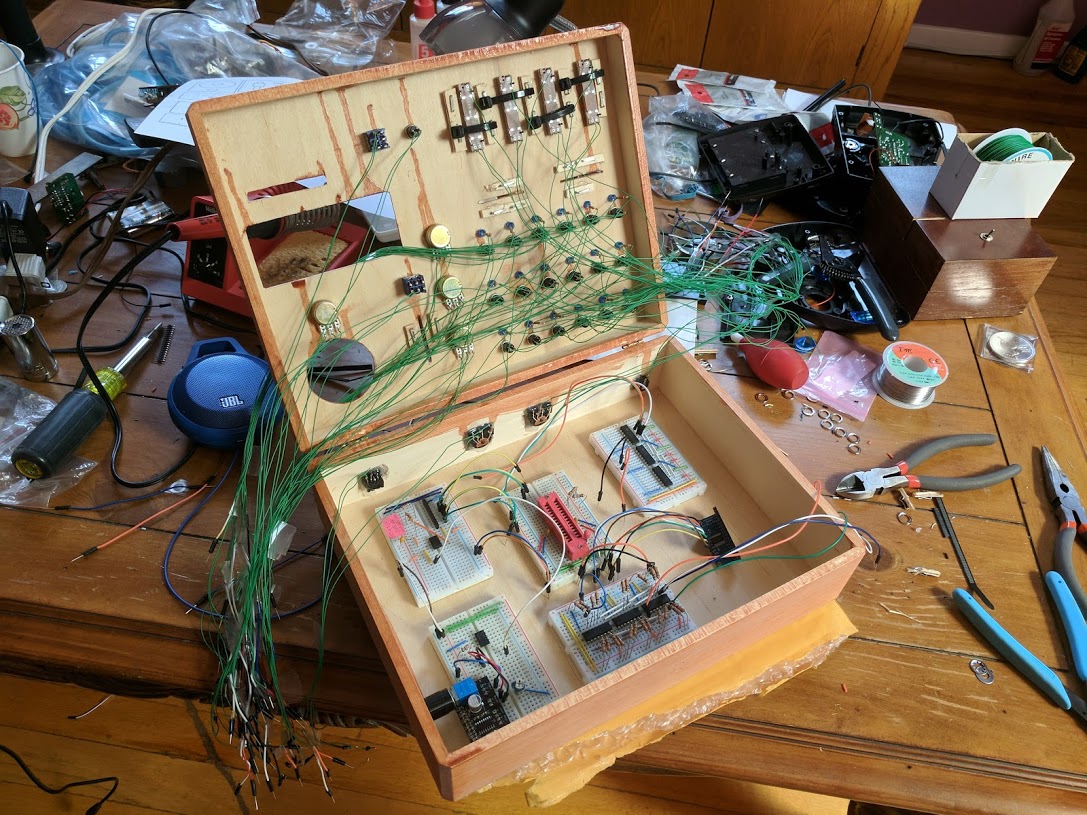 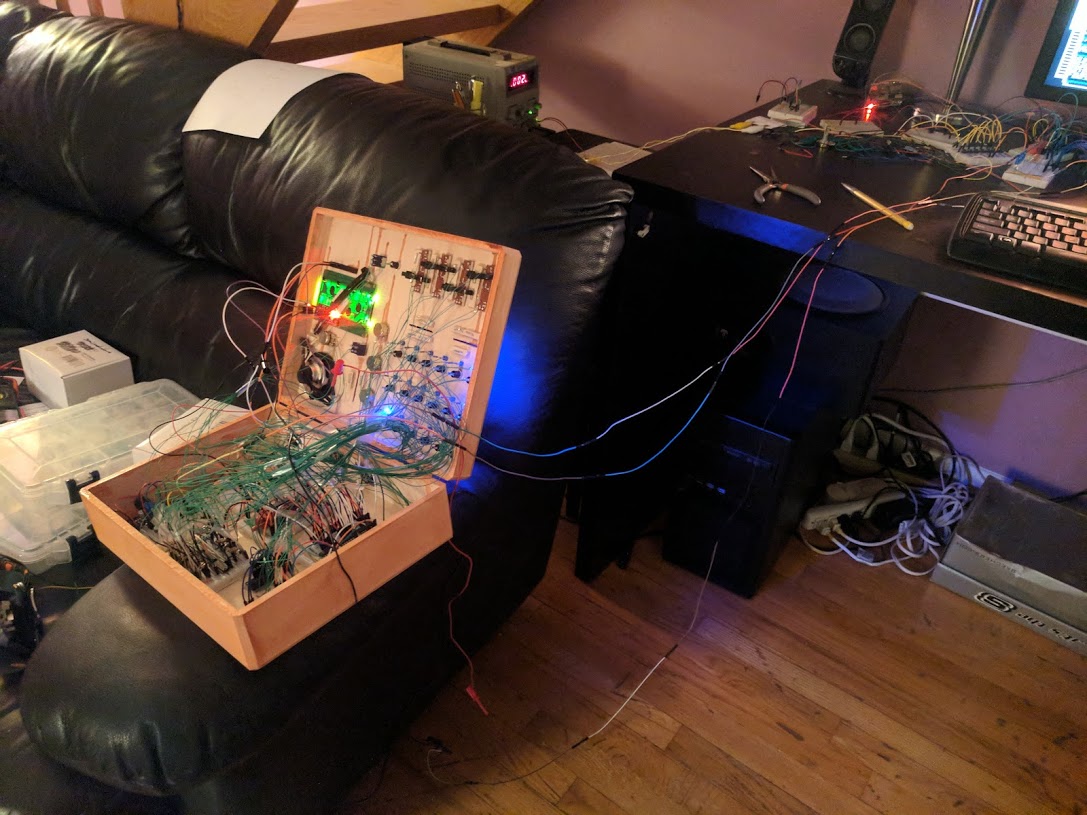 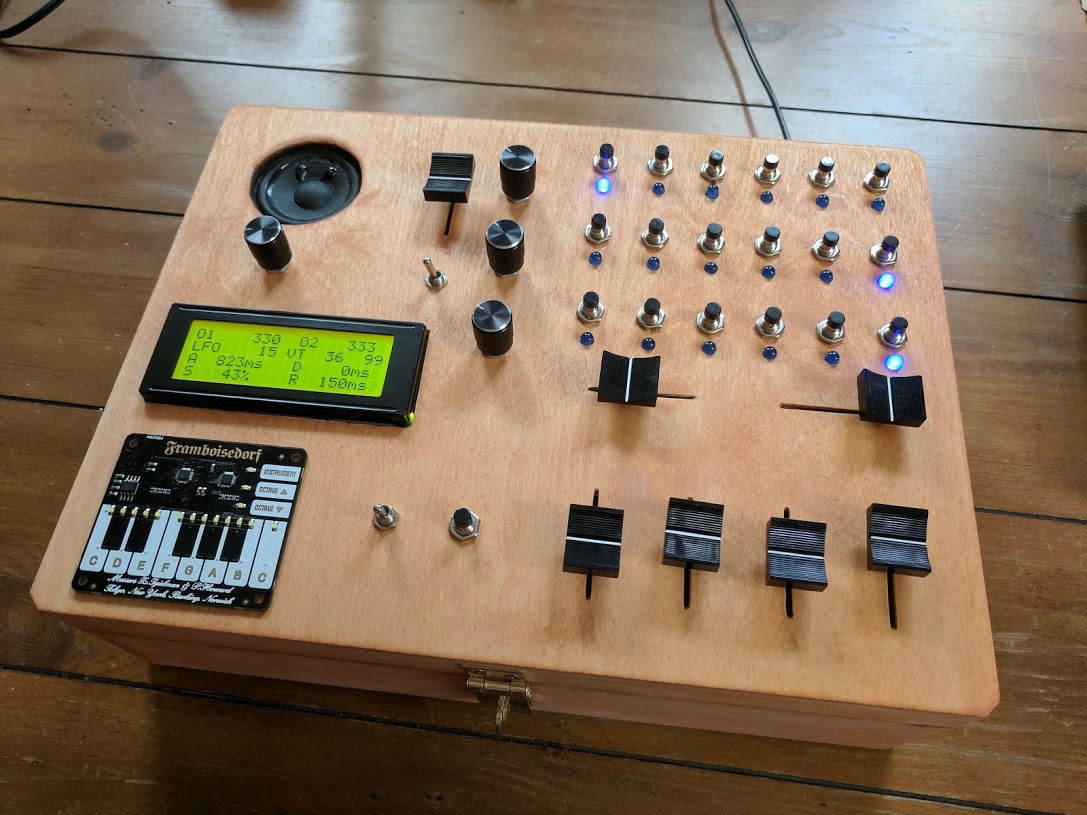