I wanted to be able to turn things in my apartment on/off remotely for a few reasons.

Lights — I have a lot of lamps, and I turn them all on/off a few times daily.

ACs — It’s hot and the ACs don’t run during the day when I’m at work, so my apt is always hot when I get home.

I wanted to solve both cases with a common implementation, which I considered to be a server (Raspberry Pi) running in my apt, accepting commands, triggering some kind of relay on/off.

For the AC use case, I actually wouldn’t be on my home wifi when I wanted to activate them, so working over the internet was a requirement.

The approach to getting this to work was:

The relays for the ACs was more involved than I first imagined.

The other bits weren’t too bad and were mostly just fun.

Later I added a permanent tablet control interface in the apt.

Previously I’ve wrapped the python Tornado webserver library behind an API I liked better.  It is modeled as an event manager (timers, etc) as well as a base class for an application which watches for specific URI requests.

The URI format is a simple getter/setter scheme.

I define the names of the ACs and Lamps on the server-side.

The client HTML is served up already knowing about the services.  Super simple interface.

Click the checkbox, an AJAX request goes out to one of the URLs above.  Checked means on, unchecked means off. 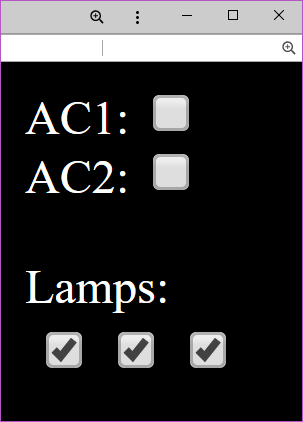 Periodically the control reconciles itself with reality, just as it does on startup.

That way, you can open as many browsers as you want, wherever you want, and they all stay in sync.  New instances sync immediately on startup.

Of course I had to open up my home firewall and set up some DNS entries to point to my Pi.

The ACs draw a huge amount of current (20A) and are also 240 volts AC power, requiring special wall outlets, etc.

For that, you need special relays.  I went with Solid State 480VAC 40A relays.  I got some huge heat sinks for them too.  These things get very hot. 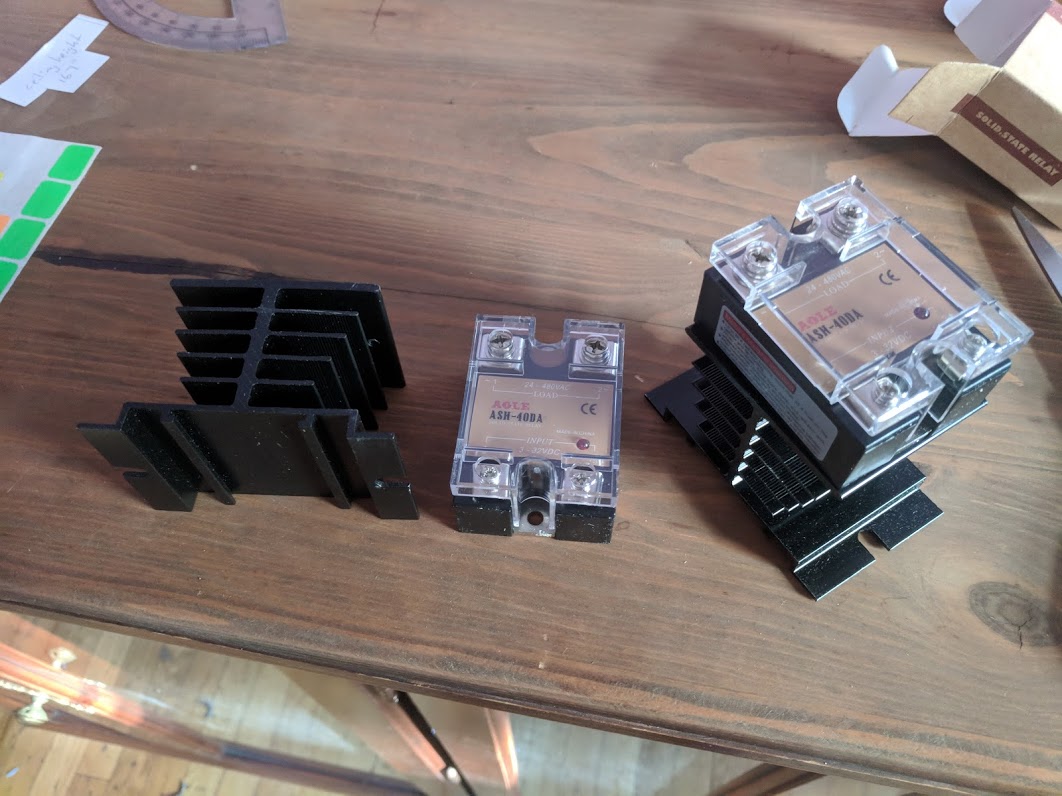 For that, I built a female-to-male plug/cord to plug the outlet into.  My relay was in the middle of the cord, completing the circuit when activated. 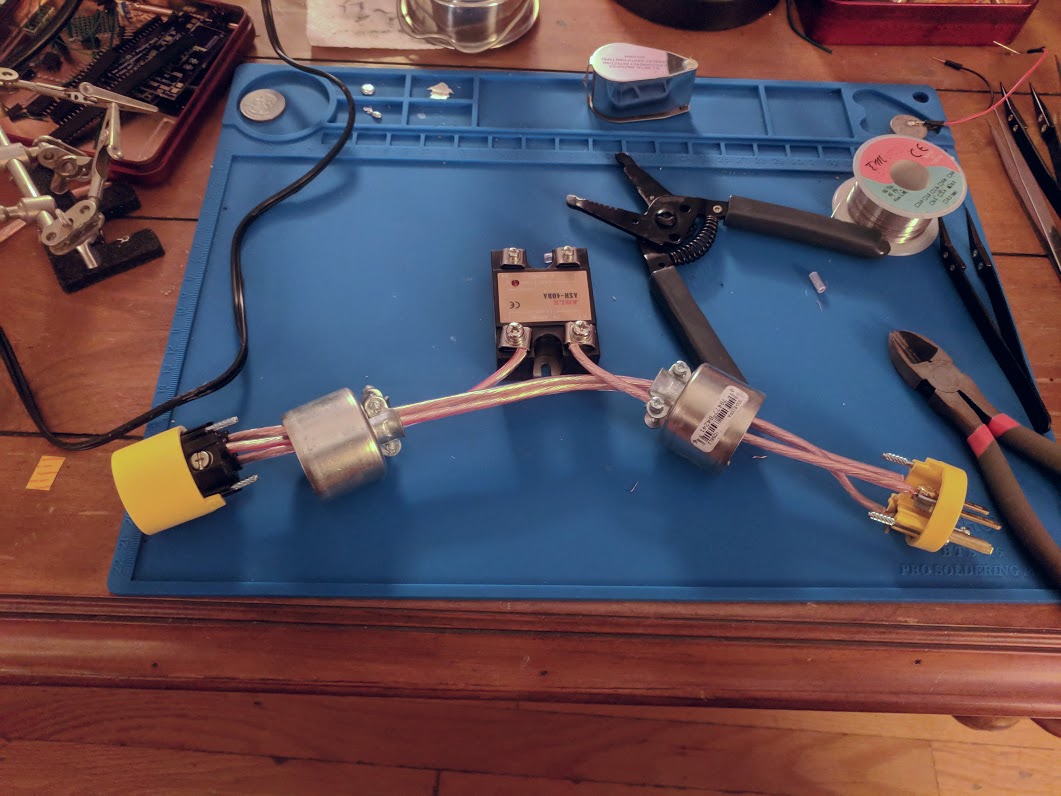 The AC plugs into my relay-enabled cable just as it would the wall.  No AC modifications necessary. 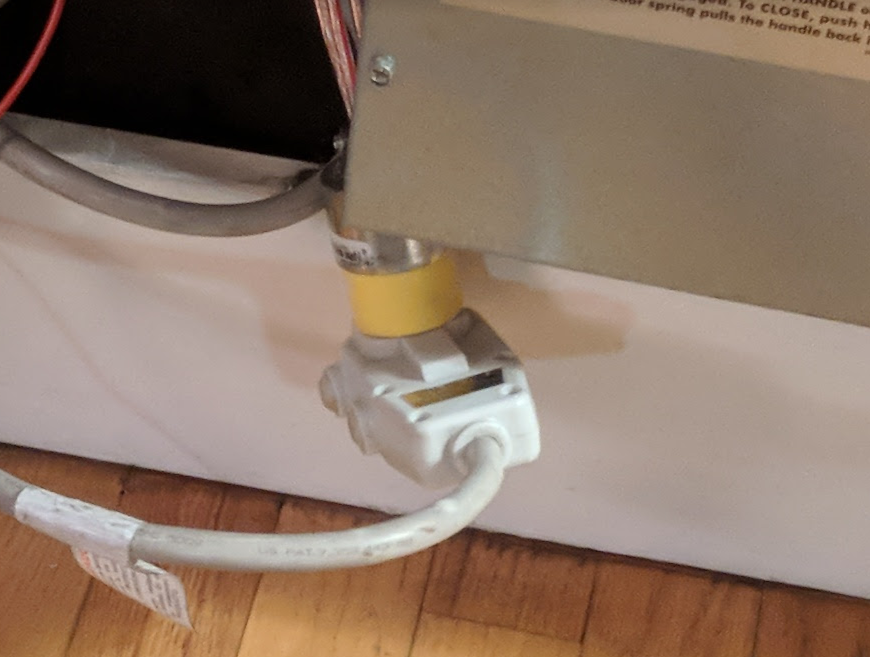 For these, more traditional mechanical relays are sufficient.

I decided to modify a power strip to have individually-remote-controllable on/off toggles through the webserver.

Each lamp would plug into a known plug.  Allows for future growth as well. 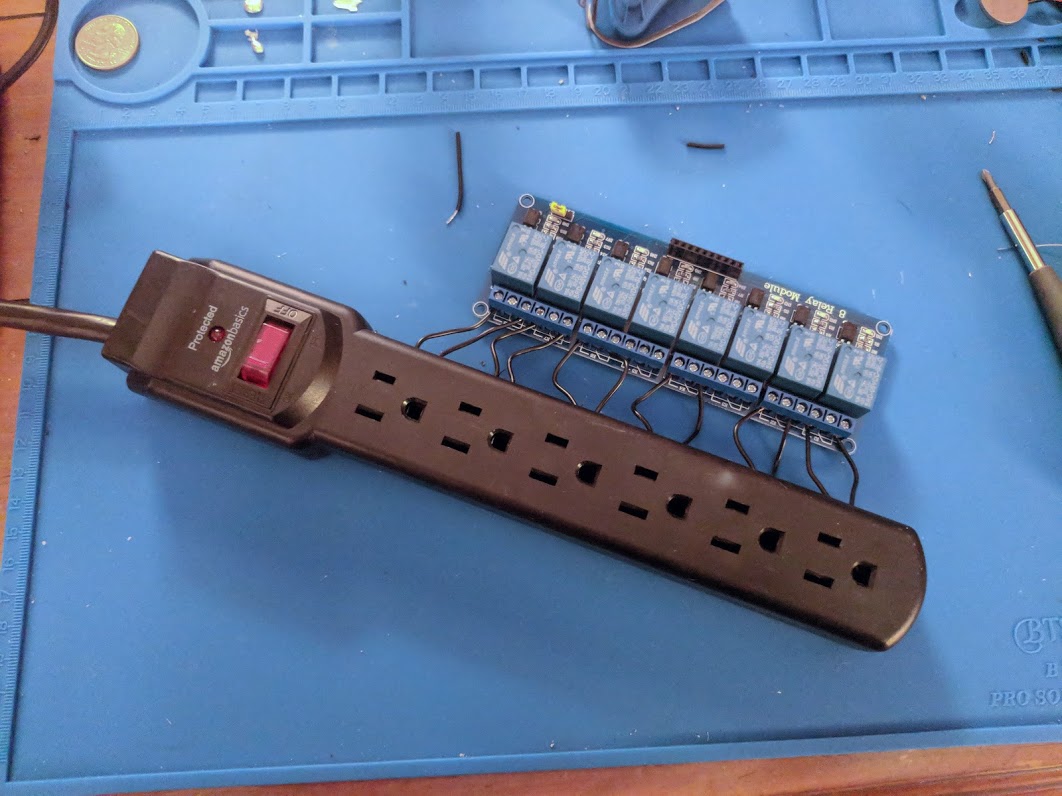 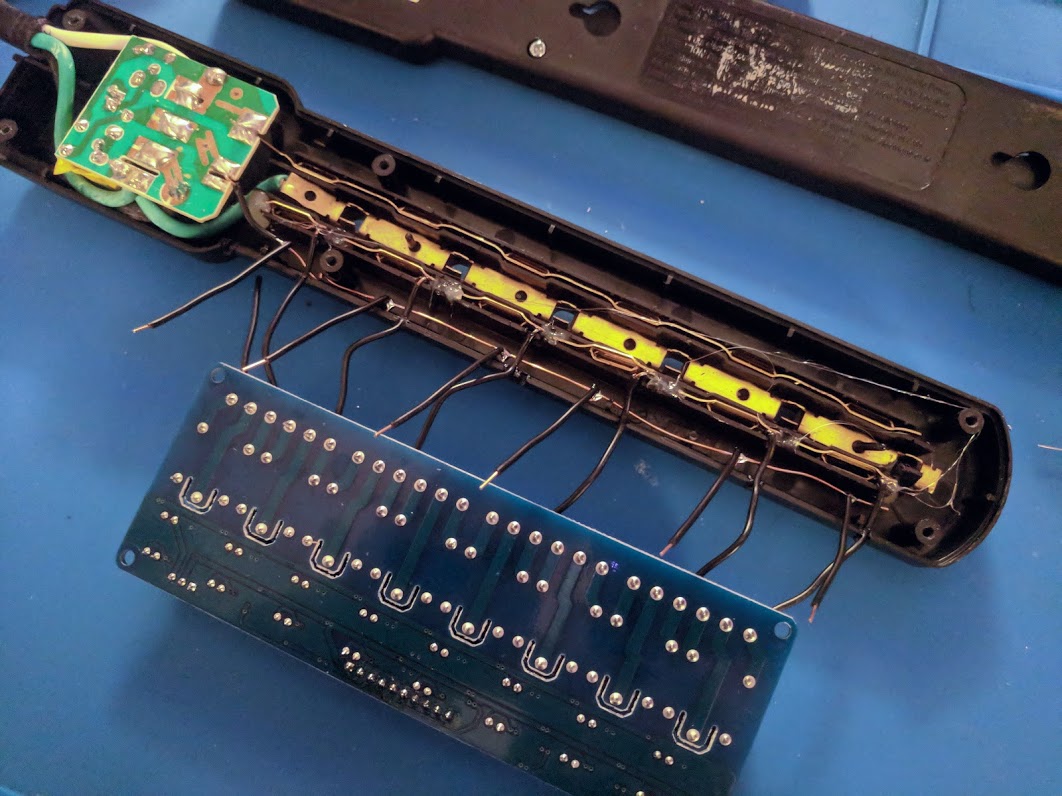 I hid all the cords and put away the electronics after this. 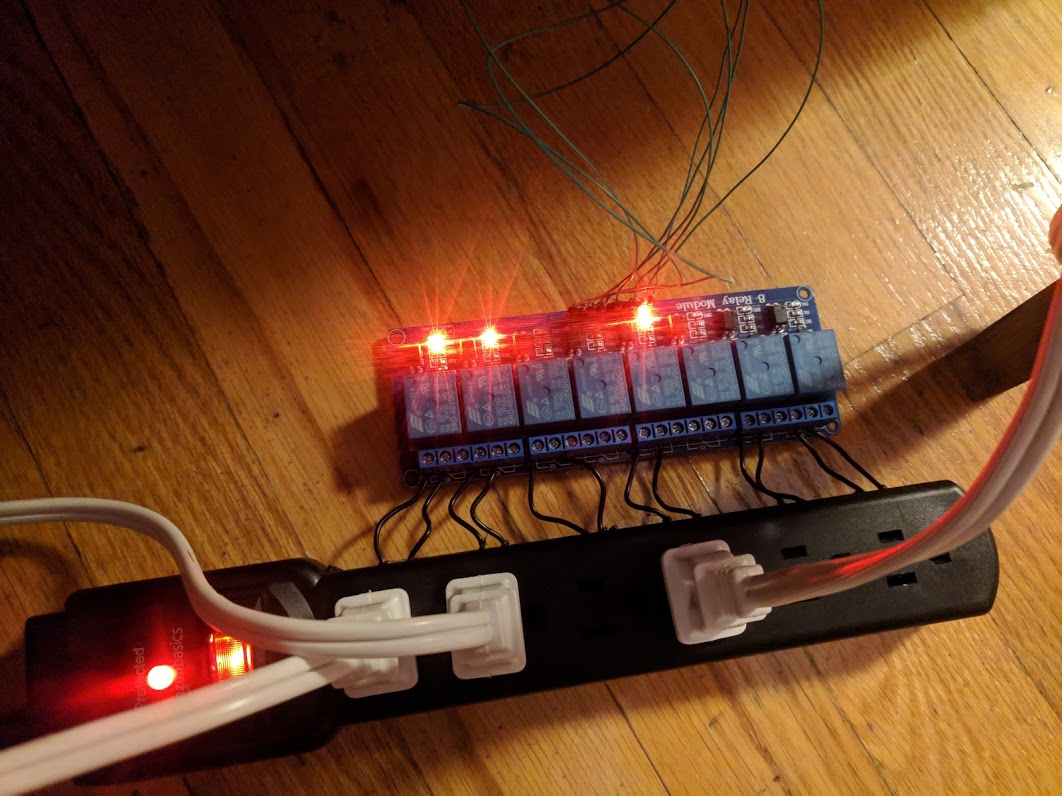 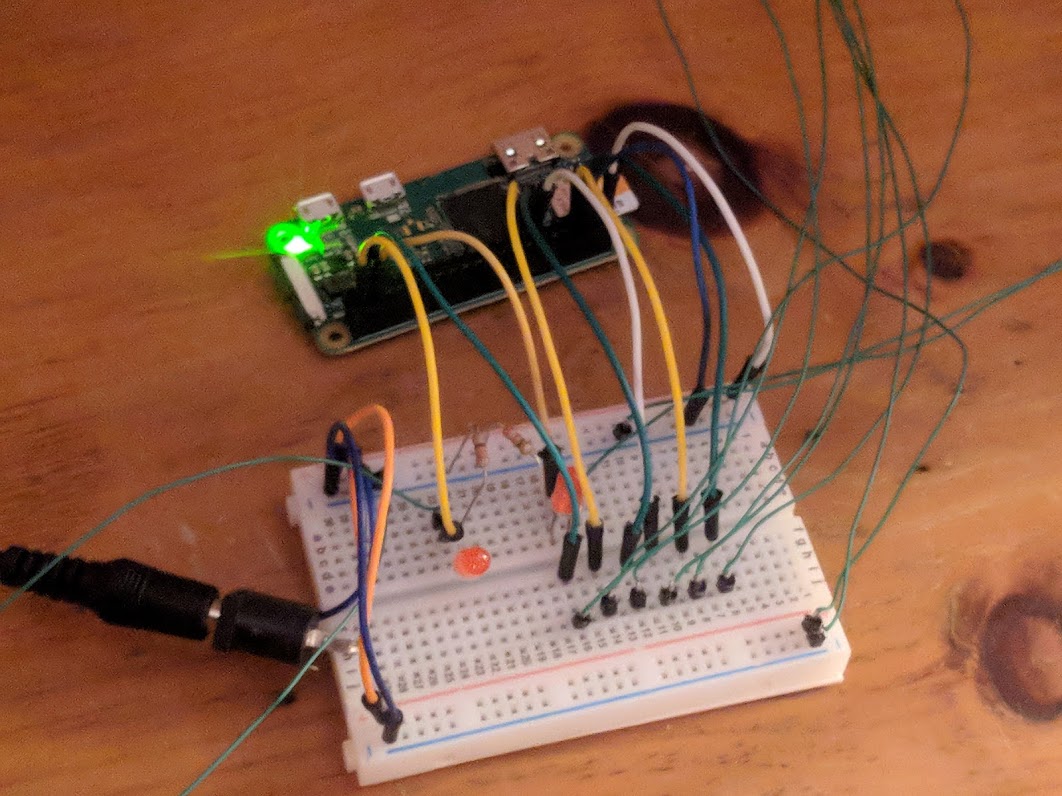 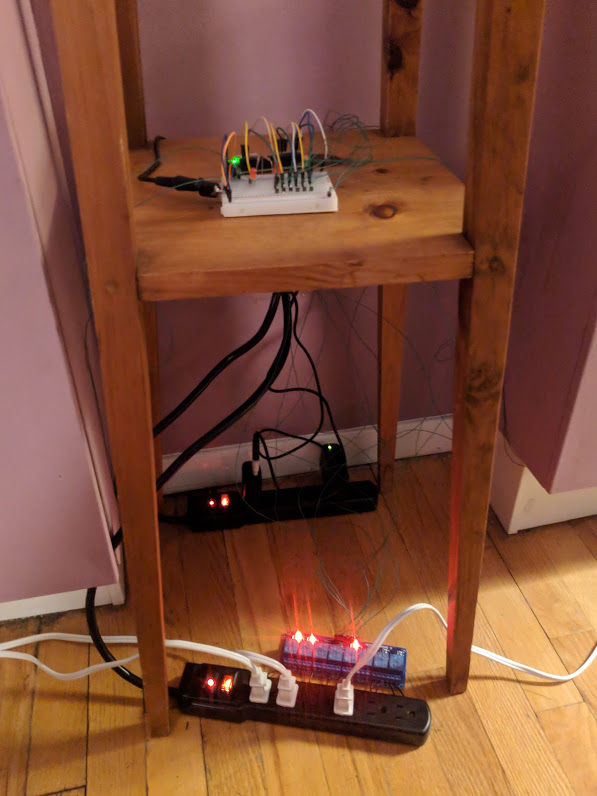 And a tablet in a case secured to the wall.  Later the HTML allowed for fullscreen and dark mode. 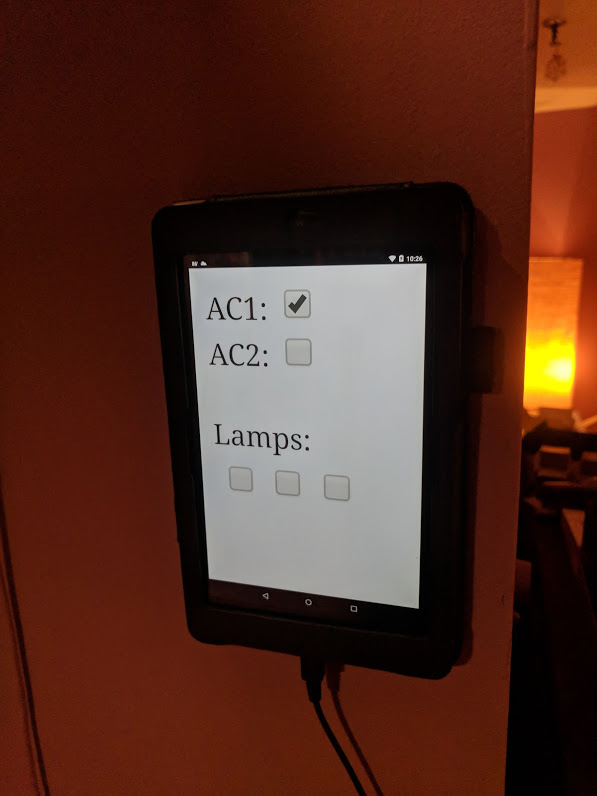