This project was a prototype replacement for the transmitter on my long distance pico balloons (link).

The duration is good.  Short messages use less battery than long ones.

The range is bad, it’s too short.  When the balloon goes over the Atlantic Ocean, all the receiving towers are out of range.

I wanted to prototype a WSPR transmitter which:

To try this I designed a new flight computer with some different technologies and new software.

Very successful test, I was able to send a wireless message to Germany from NJ (3,900 miles).

Many other locations as well.

Like other posts, I won’t be diving deep into the technicals, just giving a broad overview.

You can see a more detail on a page about the launch itself here (link).

The effort was primarily the following areas:

A re-design of the flight computer, now incorporating a different method of RF transmissions.

I challenged myself to get even smaller than my prior tracker and I succeeded at bringing in the dimensions and reduced the weight.

Working with a different radio module

I needed a radio module which could work at a frequency of ~14 MHz, as opposed to my other ~144MHz transmitter.

To achieve that, I exploited some properties of a clock signal generator chip (the SI5351 Clock Gen).

So I can use the unintended RF radiation from the clock generator to act as an RF module.

The work to confirm the clock gen would succeed at acting as an RF module was the major success here.

Communicating with and controlling the clock gen wasn’t super hard.

This was a challenging area.

WSPR is designed around:

You get 50 bits of data per message.

Each message takes 2 minutes to transmit.

Accurate time sync was possible by using the GPS module already known to me.

Getting a clear picture of the WSPR message format wasn’t too bad, but the encoding was particularly difficult to understand and get implemented.  (I wound up taking several libraries apart and fashioning a hardened working low-memory high-speed interface).

Since I’m launching a balloon to carry all of this, I had to dangle 33 ft of wire and flight computer beneath it.  Here is what that looks like:

My idea was to roll the length of wire up in paper, preventing kinks and coiling, and also unrolling easily when the balloon is rising.  It kind-of worked! 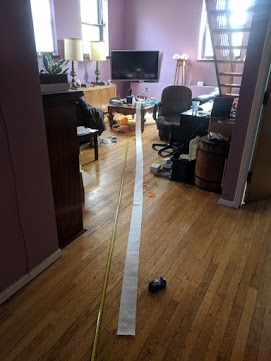 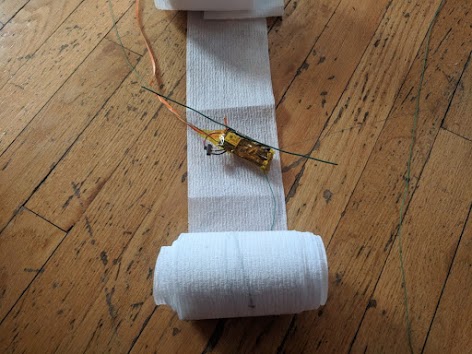